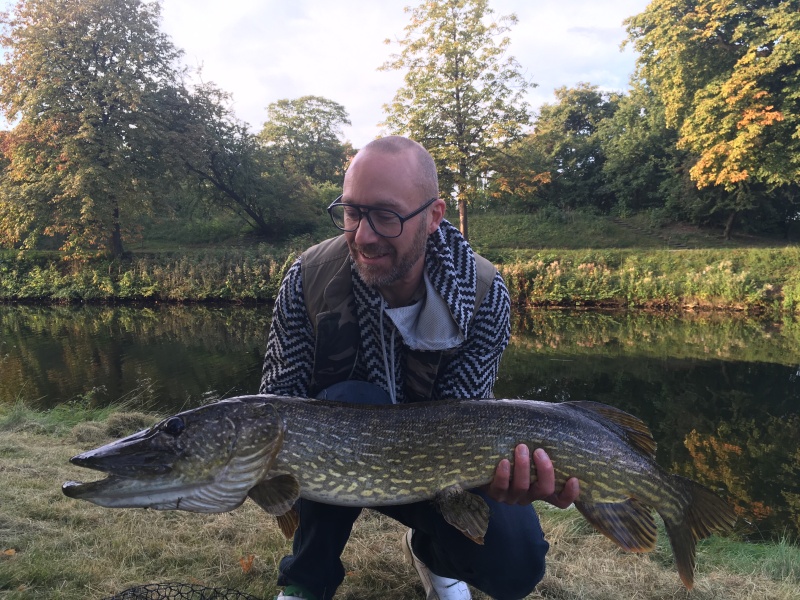 Yesterday I got my ass kicked when I visited my local pike water in the center of Copenhagen with my fishing mate Michael. We quickly caught some baitfish that we casted out into the black depths in the hope that a Danish croc might lurk out of its shadows.

It didn´t last long before the first pike got hooked. My float was dragged under immediately after a cast but I was too slow and didn´t hook it. Two minutes later my float got sucked down again and this time there was no mercy.

Michael had just been telling me about how pikes sometimes seem to hunt collectively in the same short time gaps and his point was proven straight away. While I was fighting my pike he also got a take and it was obvious that this was the big sister to the pike I was fighting.

I landed my pike – a pretty little 3 KG fish – and quickly released it. We needed the net for something more serious… After some minutes of fighting Michael´s pike gave in and on land it turned out to be even bigger than we thought. The pike was 101 cm long and the head was enormous. Elhamdalay! The big girl got a kiss and was released to her dark kingdom to eat more fish, ducks, rats and babies.

We fished on and one hour later Michael got hooked again. This time it wasn´t a pike though but a serious 1.6 kilo perch that nailed the baitfish.

Afterwards you would have expected Michael to back of and give the rest of us a chance, but no. He fished on and landed a beautiful 90 cm pike just to set things straight. Well done man. Incredible what you can hook on to in the center of the city. I´ll be back soon.