This weekend I went to Møn for a short trip with my parents and of course I reserved some hours to go fishing for seatrout. We arrived Saturday and after dropping them of I drove straight to the Eastern coast beneath the giant chalk cliffs to get two hours of fishing before sunset.

I had the coast all by myself which is quite rare for fishing at Møn even in January. Maybe it was the cold winds that kept the other anglers home as the water temperature was below 3 degrees.

I fished with my 28 gram bornholmerpil that have always served me well in these regions and it didn´t let me down. Just before sunset a trout took my lure only 1 meter from the rod. In my experience there is a big risk of loosing the fish when the take is so close to the rod but this guy sticked on and I could land it after a quick wrestle. As it was 42-43 cm and my freezer was empty I decided to bring it home.

That was the only contact I had and I drove home shortly thereafter. 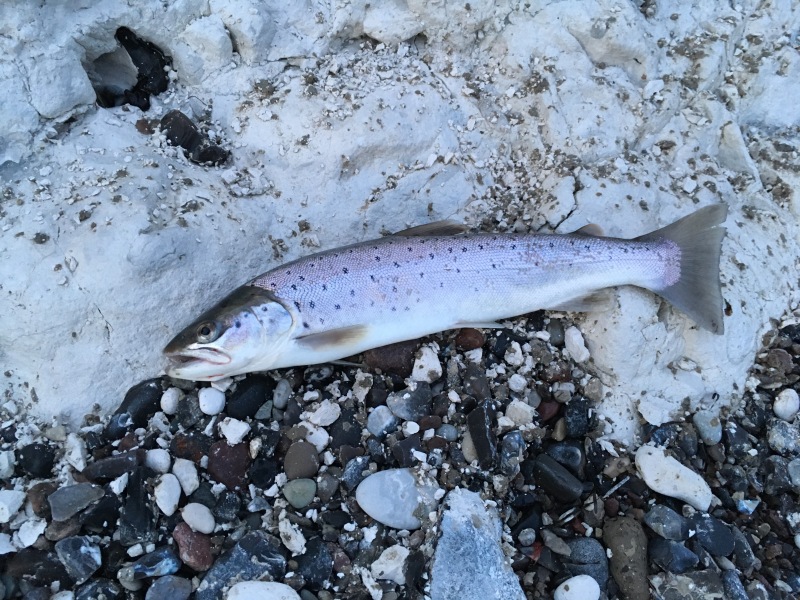 Seatrout from Møn that nailed a Bornholmerpil

The stunning chalk cliffs at Møn

Next morning I went at it again after a good long sleep. I drove to a spot down south that I hadn´t tried before. Since there are trouts all the way around Møn why not try to catch them from new spots once in a while?

It was freezing cold when I arrived but as I started throwing my lure out the sun broke through the clouds and I was happy that I had my polaroids with me.

I slowly fished my way through 500 meters of coast and after 400 meter a small trout took the lure 20 meters out. It was way below the 40 cm line so I gently released it back to its natural habitat.

After that two flyfishers arrived to the spot and one of them immediately found a shoal of small seatrouts that were hunting close to the coast. I think he got 4 small trouts in 20 minutes before the pack was gone again. Then it was my turn and a bigger trout hooked on to my lure 40 meters out. It took some line immediately and made a jump. Then the line loosened up and the fish was gone. Damn… From what I could tell it was a well conditioned 2 kg trout.
No more action that day and I picked up my parents and drove back home to Copenhagen.